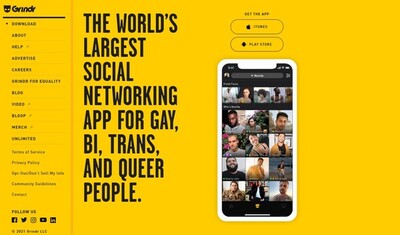 In the world of online dating apps, two stand above the rest. One is Tinder (reviewed here), probably the best known dating product on the planet and used by both straight and gay individuals. The other is Grindr – an app exclusively for gay men.

Grindr came along in 2009 (three years before Tinder, making it something of a pioneer in the geo-targeting area) and since then it has become the gay dating product. With millions of users, huge media attention and some recent updates (including new search functionality that allows you to look for certain 'personalities'), it has gone from strength to strength and now completely dominates the market.

Is Grindr Free To Use?

Is Grindr Just A Hookup App?

Before going any further, it's important to point out one notable caveat – although described as a gay dating app we would personally place it more in the 'adult' dating category. Although the content isn't necessarily adult (more on that later), the app does tend to be used by men looking for something casual. The men we spoke with on the application and others we have contacted for their opinion have all confirmed that finding gay love doesn't tend to be the reason behind users installing Grindr.

How To Use Grindr

Grindr plays a lot more on the 'social networking' aspect than other dating apps do. It shows you when people were most recently online and their proximity to you, making gay hook ups even more accessible since you can concentrate on members that are local and active. There's an immediacy factor with Grindr that we haven't seen on any dating app or site, never mind one aimed at the homosexual community. The app can be used on all the popular smart phones and runs very smoothly on Android and Apple. You can browse members (displayed nearest first in a user-friendly grid format) and even have video chats through the application.

For an app that at times gets a bad name, we were pleasantly surprised to see an excellent blog available on the Grindr website and some very sensible, thought-provoking content. Also, we were a little surprised that Grindr wasn't full of risqué images and gratuitous nudity. There's no doubt that the team here had certain pre-conceived ideas about what Grindr would be like and most of us were way out. Clearly though, this lack of naughty photos will be a down side for some people, so it's worth bearing in mind if that's what you're after.

How Popular Is Grindr?

Despite some luke-warm reviews and occasional bad press, Grindr's growth and popularity doesn't look to be dropping any time soon. In fact, some recent partnerships (including one with the Chinese gaming company that helped give the world Angry Birds) suggest that the app is not going to sit back and enjoy it's success, but rather keep innovating and investing. What this actually results in is anyone's guess, but there could certainly be interesting times ahead.

Our Conlusion: Is Grindr A Good Gay Dating or Hookup App?

Is Grindr the perfect dating (or even hookup) app? No. It's not quite secure enough for our liking (more could be done to verify users, for example) and certain features are somewhat dated. Is it the best app for gay people to find quick fun or perhaps even something more? Absolutely without question. Although apps like Tinder and POF do let men search for other men, the widespread publicity that Grindr has enjoyed, along with the huge daily visitor figures, make it unrivalled at this moment in time.

If you're thinking of trying Grindr after reading this review, remember that it's worth adding 2 or 3 sites or apps to your online dating arsenal. The more sites you have a membership on, the more likely you'll be to find what it is you're looking for. The extra effort is certainly worth it. You can thank us later ;-)