itsuckstobesingle.com - it really sucks to be single. But is this a good dating site or just another scam? 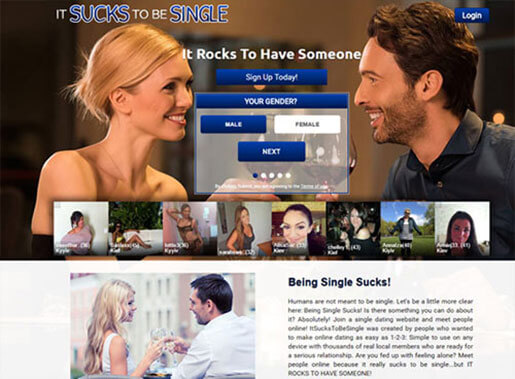 ItSucksToBeSingle is an online dating site that's gone under our radar until this point, but having grabbed our attention in recent weeks it now merits our full review treatment...

How Does ItSucksToBeSingle Work? Check Out Our Review!

We've had a few requests recently regarding ItSucksToBeSingle.com and so felt it was time to take a sneaky peak at one of the new kids on the block. The content and guidance on the main page doesn't beat around the bush – it makes it clear than being as fas as this site is concerned, being single is not fun or admirable, but “sucks”! On the other hand, it explains how important meeting someone special to have a relationship with can be, and that entering into such a loving relationship quite simply “rocks”!

Signing up is short, simple and quick. You receive an email verification to make sure you are who you say you are, pretty typical practice for online dating sites as it helps to cut down on the scam registrations that are such a nuisance for the industry in general. By verifying your email you're awarded more freedom on the site, as verified members get to perform more actions - even during the free trial. You're also asked to complete some basic profile information during the sign up process, which doesn't take long at all. Let's be honest folks, if you aren't willing to put in the effort it takes to write at least a few words about yourself, then you're going to struggle to get other members to take you seriously! Prompting us to do this at this time instantly provides a better chance of receiving messages or replies from the moment you start (for example, it's been said that adding a photo to your profile increases your chance of interaction by as much as ten times). Again, there's the incentive of additional access to features for doing these things, all of which anyone looking for love on an online dating site should be doing anyway!

The members area itself isn't mind blowing by any means, but it's nevertheless fairly sleek and well designed. The site works extremely well on the several devices we tested it on; Macbook Air, Asus laptop, iPad, iPhone 7 (mobile site) and Samsung Galaxy S6 (mobile site). Most importantly, there are people to chat with here – and lots of them!

There's plenty going on to keep us occupied, with busy site polls to take part in, blogs (many that have been written by members) to read and most importantly of course, a simple search functionality that let's you begin your quest to find local singles in your area. Despite all this activity, moving around the site is easy thanks to the main navigation bar which has been kept minimalistic with simple icons that give you a choice to return back to the home page, run a search, check your messages, etc.

It's important to make it clear in this review of ItSucksToBeSingle that this site may not be the most beautiful site, nor is it the very cheapest of the cheap. But what it does have going for it makes it worth checking out and at the very least, running some quick local searches on. It's most important asset is by far the members on the site...and by that we mean the fact that there are lots of them. The high number of members make ItSucksToBeSingle.com a crowded 'bar' and that means single people to chat with and - if you play your cards right - to go on dates with.

Our Conlcusion: Is ItSucksTobeSingle Worth It?

We like the buzz the site has, the activity going on with polls and user interaction makes it feel vibrant and almost social media like. It may be a relatively new site on the dating scene, but it's modern, fun and already popular. Whether you're starting out with online dating or you've already been around the block and need something that's a different (but still effective), we're sure you'll be pleased to have tried this site to find a relationship. After all, it does suck to be single!

As always with our reviews, we highly recommend trying two or three dating site subscriptions at a time to give yourself a far better chance of setting up real dates and allow you to get a feel for the site combinations that work best for you. There are a lot of sites out there, so investing a little bit more to try different dating sites is always worthwhile, as long as you remember to cancel the ones that haven't got you anywhere after a couple of months of effort!