The performance, conversion rate and popularity of the sites that appear on MyDatingDirectory.net as well as the compensation we receive by third party providers impacts the location and order in which the companies and/or their products are presented and also have an impact on the rating that is assigned to them. The ratings that appear on this site are determined by our subjective opinion and are also based on the performance, conversion rate, brand popularity and compensation received by third party providers. However, in some cases we do not receive any commission at all but still want to present a variety of sites to you. A list of paying and non-paying third party providers, a detailed explanation on our affiliate relationships and a review and analysis process explanation can be found here.

By using MyDatingDirectory.net, you assent to this advertising disclosure, as well as the disclosure Privacy Policy and Terms of Use which are incorporated by reference. You are not obligated to use the website, initiate contact with providers, or agree to purchase any service. The information, including prices, that appear on MyDatingDirectory.net is subject to change at any time.

Coffee Meets Bagel review - how does it work? 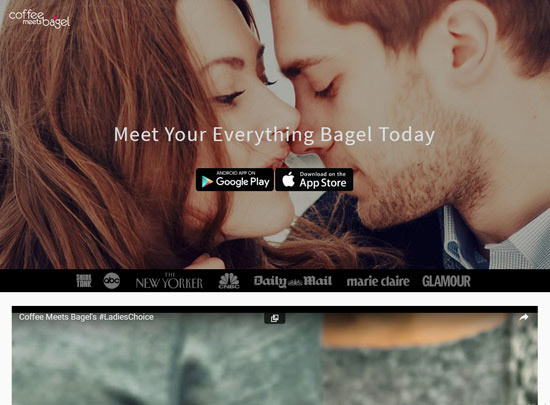 An dating app that puts the matching power in the hands of the females..an interesting if slightly sexist idea! But if it works, who cares?

CoffeeMeetsBagel is a great looking site. The main landing page is clear and informative, pointing you straight in the direction of the mobile app and motivating you with reassurance as you go. Has CoffeeMeetsBagel been featured in top magazines and newspapers? Yes! Is the site different from other online dating websites? Check! Does it have a mobile app available on both the App Store and Android's Google Play? Sure. Does the site have success stories? Indeed, over 650 couples have started a relationship because of CoffeeMeetsBagel.

As well as the user success stories there's a great blog area that's kept up to date and has plenty of interesting content including dating tips and guidance, if that's your thing. But what interests us more about this very modern dating app is the general premise. This isn't another Tinder-esque swiping game, but an innovative app that looks a little deeper in its efforts to match its members and aims to save you time while increasing your chances of getting a date.

The general idea is as follows: each day at noon, the male members on the site will receive up to 21 suggested matches, which are known as “Bagels”. They are given the option to either LIKE or PASS each one that is presented. Then, the Coffee Meets Bagel site will curate the best potential matches for women among the men who expressed interest, and aim to connect them together. This way the women know the men they are looking at each day have indicated an interest in advance and the men know that once they get a message, they're in with a real chance of getting a date. Only the women on this site choose who gets to talk to them from the men who already liked them. The site claims this cuts out the 'games' that can be part of dating and let's the ladies choose who they'd like to arrange dates with in a fun, fast manner.

CoffeeMeetsBagel positions itself as anti-swiping and anti-shallow. It's a combination of the traditional 'meet people who are compatible with you' technique (based on the sites recommendations), crossed with the technology, speed and efficiency that a modern day app provides. It's both innovative and clever – getting those matches at 12pm each day soon becomes something you look forward to. You check them on your lunch break and let the site do the rest, no more logging in every ten minutes to search, just 21 suggestions per day and in this case...less is definitely more.

One of the biggest downsides of dating over the internet is the hours and hours you can spend searching through profiles and sending messages to members that you're interested in, only to check your inbox the next day and discover you haven't had any replies back. We can completely see the reason behind building an app that removes this aspect of the dating game. That being said, we do wonder if 21 suggestions a day is enough, and can't say we were completely convinced that the suggestions provided each day at noon were the women that we would have gone for if we'd had the option to perform a more tried and tested manual search.

A lot of this site comes down to trusting the app itself, not the singles online. You have to trust it to send you relevant suggestions each day; that they are not just local, but also your 'type'; a certain level of physical attractiveness, age group or personality. You have to believe in the idea that the members you are served for lunch each day, as it were, wouldn't be bettered by more traditional means. At the moment, we fully believe that this could be the future of online dating – an algorithm doing the work and saving you time, energy and disappointment. But for now, the fairly new nature of the site means that it is hindered by the database size. However, as it grows in popularity, the chances of success will grow too.

Our Conclusion: Is CoffeeMeetsBagel A Good Dating App?

Despite this, we have to admit that we're fans of this app. We'd recommend giving it a shot, as if  you live in an area with a high number of members, the daily suggestions can really be worthwhile and something to look forward to. If that's not the case, it's still a fun app to try and certainly one to keep an eye on in the future.

We'd recommend pairing a free app like this with one of our recommended subscription sites in order to boost your chances and options in your local area. Remember, love is worth investing in and most sites only take moments to join. There are many great dating sites out there and the more you try, the better your chances of finding that special someone.